Surrender is the Answer for Our Time 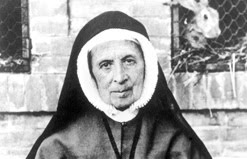 There is a simple remedy for the crisis in the Church today. It can be applied by Cardinals, Bishops, Priests, Deacons, Religious brothers and sisters, and the simple laity like you and me. This remedy is Surrender. Surrender to God. This is not a pat answer. But it is a powerful one.

One of the loveliest treatises I have read on surrender to God was written by the Rev. Mother St. Thérèse Couderc, of France. Not to be confused with our beloved Thérèse of Lisieux, Mother Couderc lived in France for eighty years before her death in 1885. She lived a simple and hidden life, often accused of indiscretions she did not commit, and suffered it all for Jesus, a familiar story for many of God’s dear saints.

The Rev. Mother Thérèse Couderc had an understanding about life with God, which she sums up in a phrase: “the surrendered soul has found paradise on earth, since she enjoys that sweet peace which is part of the happiness of the elect.” I propose to you that this is the way forward from the dark ashes of our present age.

This is not a new idea. Do you remember the parable of the rich young ruler? The man came to Jesus and said he did everything required by the law, so what must he do further to obtain eternal life? Jesus, seeing through to the heart of the matter, was moved with pity and told the man to go and sell everything he owned and come follow Him. Our blessed Lord could see through the clutter of religious observation to what the man was really attached. He had his religion, but he did not have a surrendered soul.

We may also remember the beginning of our own Christian life, the “hour we first believed”, and go back to that time and place when we had lost our sense of self, maybe for the very first time, and therein found ourselves in the gaze of a loving God. Things were much simpler back then, for we had naught but God. And indeed, some of us have not yet truly believed at all. God - His Beloved Church and these sacraments we practice dutifully - are not more than a checklist to us. We imagine that someday we will approach the gates of heaven with our checklist complete, and God will swing the gates open wide.

But checklists, while helpful for staying organized, do not produce conversion. To be converted, we do not need to lend ourselves to radical political ideologies or traditionalist movements – what we need is to surrender ourselves to God. A surrendered soul is a docile soul. A docile soul is an obedient soul. An obedient soul is a holy soul. And a holy soul is a living flame of wonder; burning out the darkness all around it.

Imagine an army of laity, priests and bishops, set on fire by the love of God. Imagine them each in the tattered rags of their sins, with only a little mustard seed of faith in their hands. Even just one of them could take that seed and command the mountains to be thrown into the sea!

I was preparing to begin my meditation, when I heard the pealing of the church bells calling the faithful to attend the divine Mysteries. At that moment the desire came over me to unite myself with all the masses which were being said, and to that end I directed my intention so that I might participate in them.

Then I had an overall view of the whole Catholic world and a multitude of altars upon which at one and the same time the adorable Victim was being immolated. The blood of the Lamb without stain was flowing abundantly over every one of these altars, which seemed to be surrounded by a light cloud of smoke ascending toward heaven. My soul was seized and penetrated with a feeling of love and gratitude on beholding this most abundant satisfaction that Our Lord was offering for us.

But I was also greatly astonished that the whole world was not sanctified by it. I asked how it could be that the sacrifice of the Cross having been offered only once was sufficient to redeem all souls, while now being renewed so often it was not sufficient to sanctify them all.

This is the answer I thought I heard: The sacrifice is without any doubt sufficient by itself, and the Blood of Jesus Christ more than sufficient for the sanctification of a million worlds, but souls fail to correspond, they are not generous enough. Now the great means by which one may enter into the path of perfection and of holiness is to surrender oneself to our good God.

But what does it mean to surrender oneself?

I understand the full extent of the expression to surrender oneself, but I cannot explain it. I only know that it is very vast, that it embraces both the present and the future.

But perhaps you will think that this is very difficult to do. Do not let yourself be deceived. There is nothing so easy to do, nothing so sweet to put into practice. The whole thing consists in making a generous act once and for all, saying with all the sincerity of your soul: "My God, I wish to be entirely thine; deign to accept my offering." And all is said. But from then on, you must take care to keep yourself in this disposition of soul and not to shrink from any of the little sacrifices which can help you advance in virtue. You must always remember that you have surrendered yourself.

I pray to our Lord to give an understanding of this word to all souls desirous of pleasing him and to inspire them to take advantage of so easy a means of sanctification. Oh! If people could just understand ahead of time the sweetness and peace that are savored when nothing is held back from the good God! How he communicates himself to the one who seeks him sincerely and has known how to surrender herself. Let them experience it and they will see that here is found the true happiness they are vainly seeking elsewhere.

The surrendered soul has found paradise on earth, since she enjoys that sweet peace which is part of the happiness of the elect.

St. Thérèse Couderc, pray for us!

Charlie is a mid-thirties guy who resides in sunny Florida with his small (but growing!) family. Charlie holds a B.A. in Religion and Apologetics and works in the financial services industry by day, writing about the Catholic Faith and Taming the Wild places in the human heart in his spare time. His writing has been featured in places like the Catholic Stand, SpiritualDirection.com, Catholic Exchange and in print at Shalom Tidings. Charlie serves as the Managing Editor for Taming the Wilds and can be reached at dcj.bhm@gmail.com.

Popular posts from this blog

Our Lady as Our Path Back to Christ

June 06, 2019
I was 21 when I realized I was being stalked by Our Lady.
In my defense, it wasn’t as obvious as it sounds. Her books just randomly showed up where I might see them, even though they hadn’t been read in forever. I was constantly surrounded by ladybugs, even inside buildings. I had discussions with two different people about Marian consecration and I didn’t even know what that was.
...On second thought, maybe it was obvious.
Honestly, though, at that point in my life, a relationship with Mary wasn’t even something I considered. Why would I need to? I didn’t hate her. I didn’t disrespect her. I believed all dogmas concerning her. What more was there for me to do?
With that kind of attitude, it’s unsurprising that my relationship with Christ was pretty much the same at that point. I fulfilled my “obligations” as a Catholic in that I went to Mass, received the sacraments, and tried to be a good person. I didn’t hate God. I didn’t disrespect Him. I just wasn’t choosing Him.
And that’s where I w…
Post a Comment
Read more

Acceptance and Spiritual Detachment in Recovery

April 09, 2019
The loneliness of Jesus on the cross is the best definition that I know of for Spiritual Detachment. Spiritual Detachment is the total negation of self. "All for you, God. Nothing but you, God." Do you see what manner of love gave himself up for our souls? When we are able to totally give of ourselves, no matter our wants, preferences, even our needs, we are becoming more fully human. The broken man counts up the cost before he gives his life away. Jesus does not.
This does not mean we have no boundaries or that we never say "no".  But we may have to learn how to say "yes" in spite of our fears.
Jesus had boundaries, and he exercised wisdom in his interactions with others. And of course we know that he was wildly honest. We can learn to do this too. We can learn to rely only upon God for our well being and no earthly treasure, while at the same time laying down our lives for another.
We must not understand spiritual detachment to mean that we care for no…
Post a Comment
Read more

How the Most Holy Rosary Can Kill Your Sin

April 17, 2019
It is when I bring to mind the reality of my own fallenness and the shackling weight of sin that I am reminded of a secret weapon – one given to us as a loving gift from God. It is an old and powerful weapon forged in the fire of prayer. This weapon is the most holy rosary of the Blessed Virgin Mary. This is the essential spiritual weapon of our time. The rosary is a weapon of heavens ilk. It is the loving gaze of Heaven’s fair Maiden and at once that great “destroyer of vice” and “defeater of heresies.” It is a sin-killer. It is the battle armor against hell and all its wicked forces. And it is the end and doom of our habitual sins. You Must Pray the Rosary Every Day How do I tap into this ancient power, you ask? Simple. Pray the rosary. Pray it every day! It will kill your sin because it will draw your gaze into the holy presence of Jesus where sin cannot maintain to dwell. A mind that is steeped in temptations is a mind quickly subdued by the beauties of God’s love. And the rosary is a…
Post a Comment
Read more